I know that it’s spring when brewers start asking if we have any maple beer recipes.  I thought I would write down some of the things that we talk about here in the store during sap run.  You can add sap or syrup to any recipe.  Some recipe adjustments can be made depending on the sort of beer you want to make. 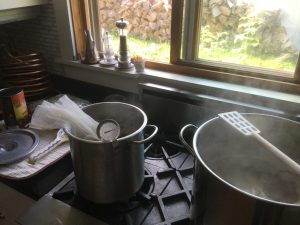 Sap is a flavorless, colorless, and aroma less water.  It will elevate your starting gravity and give you slightly more alcohol.  I usually take a hydrometer reading for my notes.  I’ve had sap as low as 1.012 and as high as 1.018.  The sap can be substituted for water in the boil.  If you decide to do an all sap brew, then you should pre-boil and chill the sap that you plan to use for topping off in the fermenter.  Sap from a reverse osmosis system is still colorless and not really mapley, but it will be much sweeter.

When I want to introduce more maple flavor into my brew, then I will add syrup to the recipe.  You can add it at the start with the wort you boil, or wait till you shut off the boil. It will definitely increase the alcohol content since it is fully fermentable.  You can calculate the extra alcohol like you would if you were using honey.  Or you can be very precise and dissolve a pint of syrup in a gallon of water and take a hydrometer reading.  If I don’t want to make a stronger beer, then I will reduce the amount of grain/malt in the recipe.  Since it’s hard to imagine what syrup will taste like without its sweetness I usually use it in maltier styles of beer.  I’ve used it in Scottish/Scotch ales, English brown ales, Vienna/Octoberfest lagers, Munich dark lagers and traditional Bocks.  Think malty and smooth!  Since syryp is fully fermentable, if I don’t want an extra low final gravity or a very thin-bodied beer, I will increase the amount of crystal malt in the recipe.  In an all-grain recipe I will mash at a higher temperature, say 157F.

I try to taste all my beers when I rack into secondary (we call that quality control).  If I want even more maple flavor in the brew, then I will make a note to prime with maple syryp instead of corn sugar or dry malt.  I use about 2/3 of a cup for 5 gallons, unless I made a very high alcohol beer, like a doppelbock, Scotch ale or a barleywine.  Then, since they tend to be drunk over a very long period of time, I use even less, like 1/2 cup for 5 gallons.

I hope this helps you out if you are the lucky recipient of a bucket of sap or a gallon of syrup.  Brewing a beer with no “water” is a pretty cool thing to do in Vermont in the spring.  Cheers.

Monday-Saturday 10 AM - 5 PM
Sunday 11 AM - 3 PM
We are open 7 days a week with the exception of some universally acknowledged holidays.